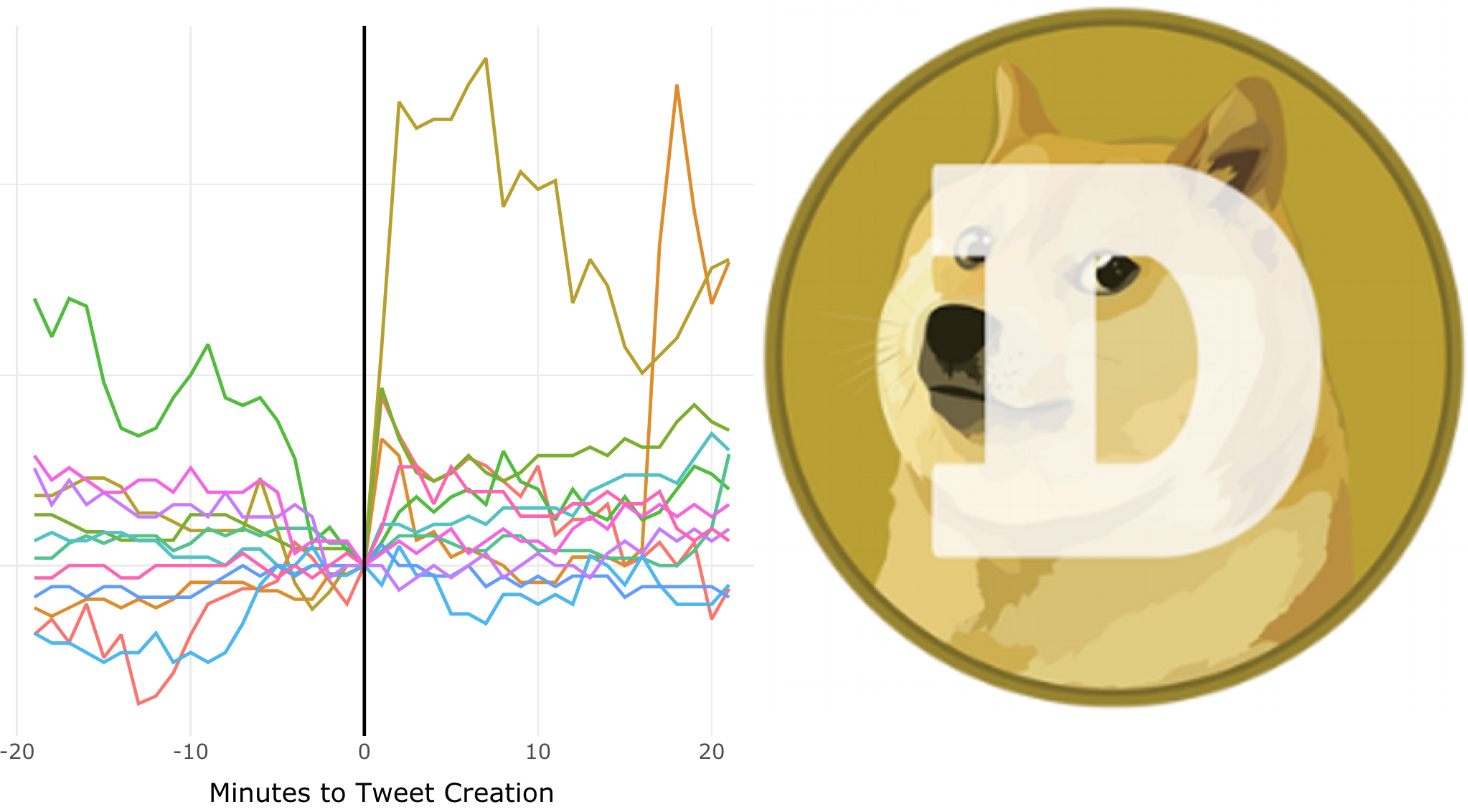 Elon Musk is known for his regular tweets about many different topics—in particular his companies Tesla and SpaceX. With close to 60 million followers he truly is a Twitter celebrity and his opinions have a big impact on technologies and companies. Most recently his tweets also covered Dogecoin, a crypto currency featuring a dog. With a little R-code we checked the effect of his tweets on the Dogecoin price and discovered significant spikes.

As data sets we use the tweet timeline from @elonmusk. With the rtweet package the timeline can be downloaded as

Note that the token creation can be a bit tricky since you first need to register an App at the Twitter developer page https://developer.twitter.com. It’s important to fill-in not only the consumer_key/consumer_secret but also the access_token/access_secret to successfully create the token. After the successful retrieval we get a data frame with (an excerpt) of the tweets from the @elonmusk timeline:

We executed get_timelines() multiple times to get most tweets out of the timeline.

To study the price effect of his tweets the binancer package was used to download intraday open-high-low-close (OHCL) data in 1-minute intervals from the Binance crytocurrency exchange. We decided on the Dodge vs. Bitcoin (DOGE/BTC) currency pair to adjust for the overall market movements and to better see the price effect. The function binance_klines() returns a data.table containing all intraday pricing data:

A typical way to study such events on financial markets is to look at the price movements right before and after each tweet happened. Especially the price action around each tweet can give us an indication of its market effect. For this analysis it is critical to correctly join our 2 data sources, containing twitter and price data. We also need to add the relative time (e.g. minutes relative to tweet timestamp) to the tweet event which can be used as a common scale for plotting. For this task the function find_price_window() was created to return the relative price changes around a specified date:

Now we can create the data table dogetweets which contains the tweets AND the price action around each tweet by the relative time:

We can finally unnest() the price data from price_window and create a ggplot, containing the price movements around each elonmusk dodge tweet: 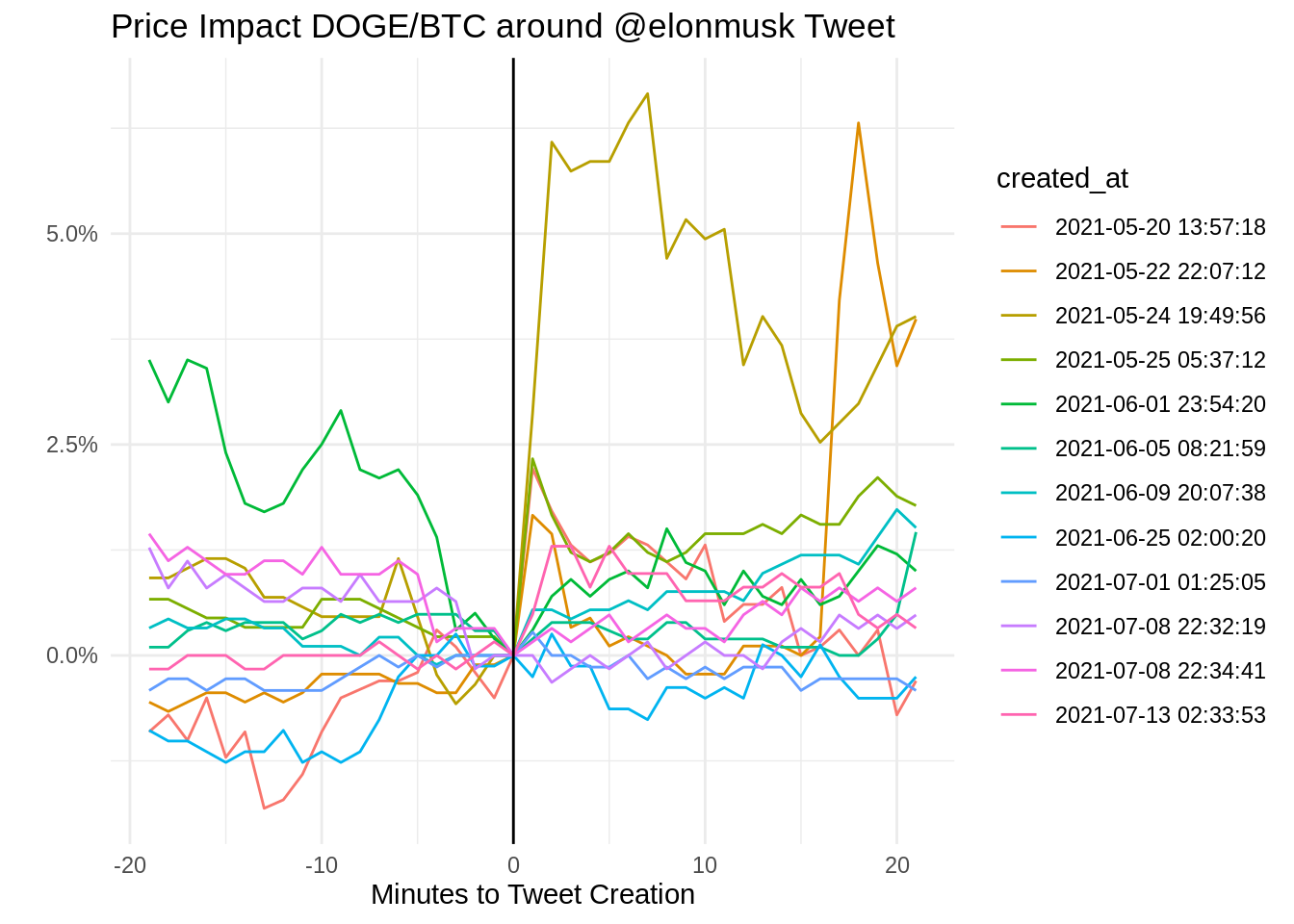 We can also show a table containing the Top-10 tweets by absolute price movement:

For some tweets we indeed see a slight price effect for the DOGE/BTC quote on the Binance exchange. The most important tweet which triggered an immediate, positive price reaction by almost 5% versus Bitcoin from our sample seems to be this:

In the next post we will investigate how the sentiment of tweets may affect the price direction of specific markets.

A great course set-up to get a first insight into the workings of R and to wet your appetite for more – the possibilities seem endless. A very enjoyable experience, thank you! 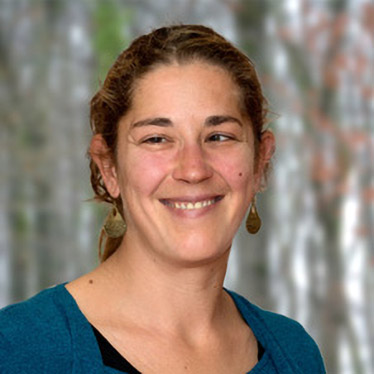 We don't support your browser anymore